Students honor those who served

Students of Schenectady’s Brown School did more than just learn about Veterans Day — they thanked vets for their service face to face. 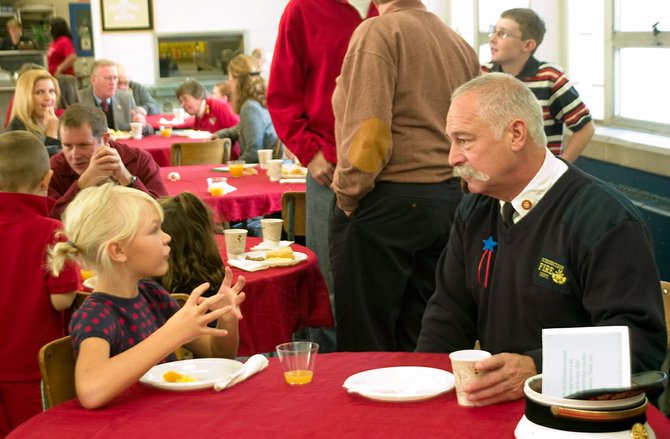 Brown School fourth-grader Isabel VanDerveen talks to Michael DellaRocco after the Veterans Day ceremony at the school on Friday, Nov. 9.

Students of the private school gathered to sing songs and show off special projects to local veterans at a Veterans Day ceremony on Friday, Nov. 9. It is becoming a tradition at the school, but this year’s event hit close to home for English teacher Annu Subramanian, whose son, Darshan, is scheduled to deploy to Afghanistan.

The event also marked Subramanian officially joining Blue Star Mothers, which is an organization of the mothers of service members that provides support for veterans and their families.

Darshan Subramanian, a 1st lieutenant in the Air Force, said he always wanted to be a pilot and was moved to enter the service after 9/11.

“I found a way to do both and became a pilot in the Air Force,” he said in a statement. “I felt it was my responsibility to help out so that future generations, perhaps my own children, can enjoy the privileges that I enjoyed.”

Annu Subramanian said her family was “very worried” when they first heard her son was scheduled for deployment.

“Although you might expect it, it is not easy to take in,” she said. “The Brown School community’s prayers and friend’s prayers will help him come through.”

Dina Astemborski, a member of Blue Star Mothers, went through a similar experience when her son was deployed to Afghanistan.

“It was a very fulfilling year for him, but very trying at the same time,” Astemborski said. “It is a lot of stress and worry on the family, but in a good way.” Astemborski said Veterans Day is a very emotional time for her, but she is also very proud of her son for his service. She said care packages or cards from children held the most meaning while he was deployed.

Blue Star Mothers Capital Region President Janet Moran said the organization acts as “a support group for moms” alongside supporting active duty soldiers and being active in the community.

“It is wonderful the children are learning about the veterans,” Moran said. “It is the kids that are going to have to remember in the future.”

Brown students recognized veterans in different ways at the ceremony. One project was to place stars on a world map denoting all the places members of the Brown School community and their families had served.

Brown School students complied information on a map of where members of the school community and their families had served, with stars denoting each location.

“At Brown School we strongly recognize those who serve and protect our freedom,” said Patti Vitale, head of school, in a statement. “This is an opportunity for us to teach our students about the important role our servicemen and women play.”

The songs students sang were more than just melodies, too, because students learned the meaning behind the words. Jonina Wilkins, a music teacher, said she teaches students the official songs of military branches, which also are popular among students.

“They love to sing them,” Wilkins said. “For some reason, those songs, they just eat them up. I just think it is important for them to have that respect and I think the music helps them … to be thankful and grateful.”

Wilkins said she goes through the words in the songs with students and the history of the “Star Spangled Banner” to explain the meaning.

“I try to go into the context of all the songs so that they truly understand them and they are not just signing words and they have no idea what the words mean,” she said. “There are all kinds of cool knowledge hidden within the songs that I try to impart.”